Have a question or want to chat? Email me angela@angelaschaffnerphd.com and I’ll be in touch!

How do we reduce conflict between groups? This is a central question we are forced to confront, especially in light of the tragedies of the past few weeks. Gay Americans, Black Americans and Police Officers are groups who face heightened risks every day right now.

In a classic social psychology study called “Robber’s Cave” (Sherif, 1966), two groups of 11-12 year old boys were placed into two groups at a camp- the “Rattlers” and the “Eagles”. They were asked to compete for limited resources, and faced competitions where only one of the groups could win. As a result, they developed “wicked, disturbed, and vicious” behavior toward the opposing group. Various attempts to were made to resolve the conflict between the two groups- introducing a third group, introducing a common enemy, arranging for pleasant experiences to share together as one big group (e.g., watching a movie). None of these worked, and the conflicts and problematic behavior remained.

But one thing did work.

When shared goals were introduced to the groups, especially when there was a sense of emergency and urgency, everyone came together. For instance, the water supply broke down and the boys from both groups had to work together to solve the problem if they wanted water to drink. This concept of “superordinate goals” brought the boys together.
We already have an emergency- a country divided in politics, in prejudices, in identities. We already have wicked, disturbed, and vicious behavior. Weeping and grieving are not enough. Using our voices to cry for justice is not enough. Seeking pleasant experiences in diverse communities is not enough. We need to come together toward higher, common goals, and realize that we need not be threatened by groups who are different and unfamiliar to us. Make it your goal as you talk with others to find the goals you share, and put your energy behind these goals. Voice them. Come together around them. Let’s find the superordinate goals and pursue them. 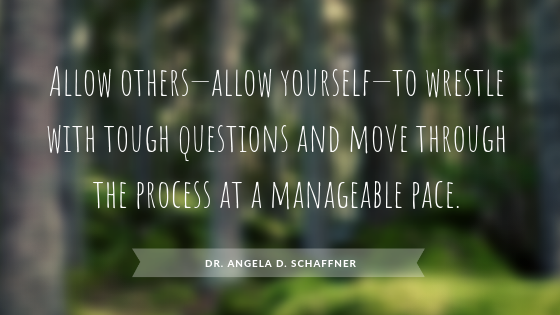 Small Shifts
← How to Remove Unnecessary Obstacles
“Every Man Versus Himself” →

More Myself by Alicia Keys. This was a good beach

Heading back to work today after a mid-day float t

This dojang in my friend Max’s garage has served

A Dose of Hope by Dr. Dan Engle and Alex Young. Su

This Here Flesh by Cole Arthur Riley. Her words an

I kind of grieved the whole time I read this, beca

No Bad Parts (Richard Schwartz) Finished this one